Orgasmic Meditation Makes Mindfulness Sexy. But Does It Work? 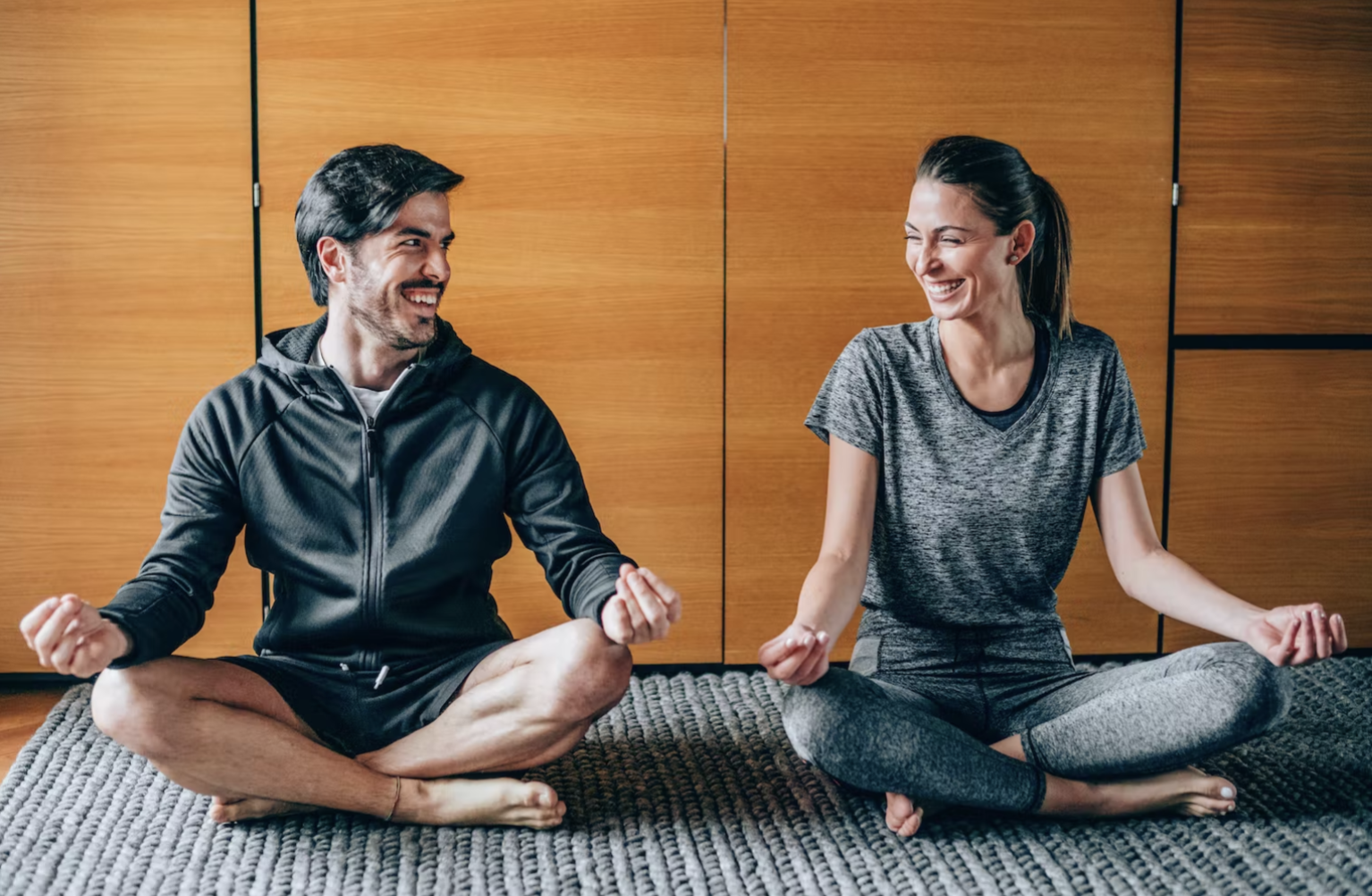 – Content and imagery reposted with permission –
For first-timers, meditation can be difficult to get into. But what if it was a little bit…sexier? That’s the ethos behind orgasmic meditation, a mindfulness technique that combines meditation and sex to achieve new levels of intimacy and inner peace. Many people across the world have shared their viscerally positive experiences with the practice — yet, various controversies surrounding the organizations promoting orgasmic meditation, as well as questions about the science behind it, have emerged over the years.

Today, experts in mindfulness, meditation, and sex therapy are trying to cut through the hype and questionable science to get to the bottom of how sexual pleasure can effectively be incorporated into meditation practices. This is what you need to know.

What Is Orgasmic Meditation?

If you’re single, it might be hard to practice traditional orgasmic meditation (OM), which is a partnered practice for straight couples — or for women willing to pay a professional OM instructor.

As the woman lays down in her “den,” usually a comfortable space on the floor, the person with the role of the “stroker,” typically a man, wears latex gloves and covers their index finger in lubricant, then proceeds to pleasure her. The stroking has to have a methodology to it, though, as the stroker must massage the upper-left quadrant of the clitoris with a firm yet gentle up-and-down motion for approximately fifteen minutes. Here’s a (definitely NSFW) video on how to properly practice the meditation technique, if you need a visual explainer.

What’s crucial here is that the goal of the stroking is not, contrary to what the name might suggest, orgasm. Rather, the goal is reaching a level of heightened pleasure, inner peace, and arousal, in which most people are said to feel happier and more creative. However, moaning throughout the practice is highly encouraged. OM practitioners are recommended to share their thoughts and feelings out loud after the meditation in order to vocalize their inner world and reflections.

Sharing sexual desires is a core part of orgasmic meditation. I participated in an orgasmic meditation class in October 2016 with TurnOn Britain, the now defunct organization that brought orgasmic meditation to Europe. Its co-founder Kapil Gupta explained the basics of orgasmic meditation and was adamant that before actually getting to any stroking, it’s necessary to open up with oneself about our sex life and desires. What’s your deepest desire? How do you feel about it? What is something you like but you’ve not had the courage to admit to yourself?

Why Orgasmic Meditation Is For Men, Even If It’s Not

Orgasmic meditation is all about the stroking of the clitoris, and cisgender men aren’t actually touched by their partner or by themselves in the process. They don’t kiss or flirt or even have to take their clothes off. But that doesn’t mean they don’t get anything out of the experience.

Some men have reported that orgasmic meditation shifted their perspective about sex. As one man told GQ, practicing OM helped him realize that sex isn’t about giving so that he can get something in response. It’s helped him learn to not expect anything out of sex and to enjoy it without the ultimate goal of climaxing. Another man said orgasmic meditation helped him learn to slow down and focus on connection in the bedroom.

Men also report benefits that have nothing to do with getting it on. Some report feeling more energized after OM. And because of the focus on communication during orgasmic meditation, some have improved their ability to listen to women. In this way, one man even reported that OM helped his relationship with his mom.

As another person told Healthline, “I’m not a scientist but I can say that [practicing OM] helped my confidence — it helped my relationships with women. It turned my volume up. I felt like I finally understand women and how their bodies and minds work.”

Orgasmic meditation has gathered a sizable following over the past 15 years. OM practitioners tout great benefits to their happiness, tranquility, and creativity. But scientific research on the practice is still scarce.

One 2021 study out of Thomas Jefferson University seemed promising. In this research, fMRI scans showed the difference in cerebral stimulation among 20 participants during OM practice and while resting. For both the stroker and the partner being stroked, there was increased connectivity in brain areas such as the frontal lobe, amygdala, and prefrontal cortex — areas of the brain responsible for emotion and cognitive functions. “It showed some efficacy in terms of changes in the brain, which could have positive benefits for certain types of psychological conditions,” says Jon Aaron, a New York-based certified mindfulness-based stress reduction teacher, who was not involved in the study.

But that evidence in favor of orgasmic meditation is thin, and experts aren’t all on board. Some, such as Aaron, see more traditional forms of meditation as more beneficial than OM. “Mindfulness meditation practices, which have been around for over 2,500 years and in the last 40 years have been scientifically studied, have shown efficacy in dealing with many different emotional and physical challenges,” Aaron says. “Certainly to a far greater extent than OM would seem to offer.”

For example, Aaron notes, studies have proven that simple mindfulness meditation techniques, such as Mindfulness-Based Stress Reduction, can reduce anxiety, stress, and depression. A review of nine clinical trials in JAMA Psychiatry in 2016 suggests that mindfulness-based cognitive therapy can reduce rates of depression relapse for up to 60 weeks. Another study showed that people who underwent an eight-week mindfulness practice had significantly more flu antibodies than their peers who didn’t. And a 2017 study showed that meditation could help older adults increase attention.

Some experts take a strong stance against orgasmic meditation. “It’s not meditation. It has no roots in classical or modern-day practices like biofeedback or mindfulness,” says Tom Ingegno, DACM, a Baltimore-based acupuncturist with a doctorate in acupuncture and Chinese medicine.

Most importantly, some practitioners have described the world of orgasmic meditation as something of a sex cult. An expose published by Bloomberg journalist Ellen Huet from 2018 detailed stories of “sexual servitude and five-figure debts” related to OneTaste, the main organization promoting orgasmic meditation in the U.S., now rebranded to the Institute of OM.

So, although there aren’t any identified harms of trying out orgasmic meditation with someone you trust, trying it with an organization set up to promote the practice is a different story. “There is a big difference between experimenting with a trusted partner and the setup that OM organizations promote,” says Ingegno. “Unfortunately, women report abuse and rape, which has no place in meditation or spiritual practices.” Several lawsuits are pending for various sexual misconduct issues, he notes, and this has made it increasingly difficult for specialists in the realm of meditation and sex therapy to take orgasmic meditation seriously. The Institute of OM did not provide comment about these allegations.

Personally he doesn’t see any way that adding in sexual pleasure is better than traditional meditation — and there’s no guarantee it’s more mindful than just having sex — but there is certainly overlap between sexual arousal and meditation.

Richmond likes to think of including sexual arousal into meditation as a practice of integrity. Not in the moral sense, but the physical one, in which the body and mind are on the same level. She has clients who practice some sort of self-pleasure with their meditation every single day, and others who only sometimes decide to incorporate eroticism into their meditative practice.

“So, yes, I prescribe a version of OM, but I don’t call it that,” says Richmond. “I think [meditation] could be profoundly better by incorporating sexual pleasure. When we’re focusing on that intention and being in our bodies, and then we’re touching this most sensitive part in our body, it can be a spiritual, ecstatic, transcendent act.”

Previous What is a Blended Orgasm?