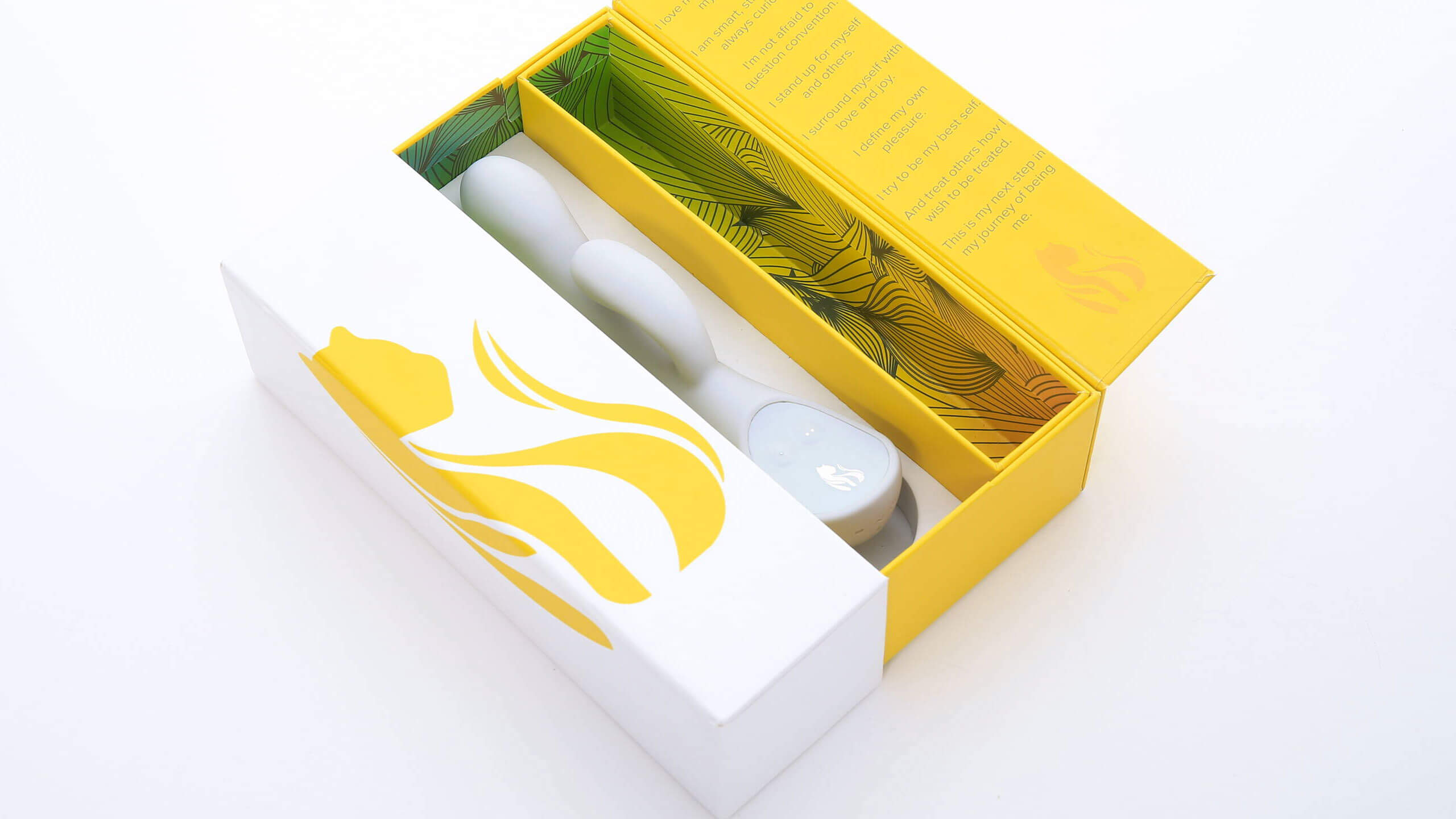 “Technology gets more prolific and ubiquitous in our lives on a daily basis. Whether we’re talking about apps, tech dating trends, sex with robotic companions, teledildonics, virtual reality, or AI-enabled companions, it’s likely that tech-sex will be the norm in the next decade, not the exception.”

Kayla* sits on the edge of her bed scrolling through Lioness, the app she’s been using to track and improve her orgasms. The 29-year-old social media manager tells me she had a particularly good one yesterday, and hands me her phone so I can see.

On the screen, there’s a graph of rolling peaks and valleys whose high points represent the repeated vaginal contractions of her climax.

By comparing this orgasm to yesterday’s, and the one she had the day before that, Kayla is able to see that her orgasms come faster when she is in a better mood and hasn’t taken any stimulants. Looking back at her history over the past month, she also notices she tends to have stronger orgasms in the morning than at any other time. Cheekily, she sets her alarm a bit earlier for the following a.m.

Biohackers are people who use do-it-yourself methods to “hack” the human body in order to enhance its functioning or overcome its natural limitations. Most often, that involves changes to the body’s internal or external environment, which can take the form of body modifications, implants, radical diets, and cognitive enhancement drugs designed to improve fitness, health, or mental agility. However, a more recent trend has a growing number of women like Kayla using biohacking for a slightly juicier reason: to manipulate and enhance their orgasms and pleasure. Basically, the Lioness is like a Fitbit for your orgasm.

There are as many ways to hack an orgasm as there are to have one. Some people, like controversial biohacker Rich Lee, use high-tech, DIY body modifications to allegedly elevate pleasure to superhuman territory with orgasm-inducing spinal implants and wearable electromagnets that stimulate the clitoris. Others, like period biohacker and creator of the hormone-tracking app MyFLO Alisa Vitti, focus on helping users zero in on their own biological trends and use them to their advantage. In her bestselling book, WomanCode, Vitti suggests hacking into the four stages of the arousal process in order to maximize the release of health- and mood-enhancing hormones sexual pleasure can bring. By focusing less on rushing to orgasm and more on elongating the plateau phase of arousal (the time just before climax), it’s possible, Vitti tells me, to amplify the amount of mood-boosting oxytocin and inflammation-reducing nitric oxide in your system. “The longer you stay in this phase before you climax,” she says, “the more hormones you will produce that improve your period, your fertility, and your immune function.”

Smart sex toys like Lioness track some of the physiological mannerisms the female body undergoes in the throes of pleasure and orgasm; everything from pelvic floor contractions to body temperature to pressure of touch and more can be measured and relayed to users on an app or interface. Even environmental or behavioral variables that affect pleasure and orgasm can be tracked and analyzed with the right technology—stress levels, sleep quality, hormonal makeup, the presence of medication, hunger level, whether or not you’ve had stimulants like coffee during the day, whether or not your roommate was home, what you fantasized about, and so on. They function kind of like food diaries or fitness trackers, but for pleasure.

The end goal of all this data? As Lioness founder Liz Klinger explains, tracking and interpreting the body’s responses to pleasure helps users see patterns in what works and what doesn’t. This, she says, can lead to “better sex, more pleasurable experiences, and, yes, even better orgasms.”

Hacking can also help people address health concerns such as pain during sex and experiment with different stimulants and depressants such as alcohol and cannabis as palliatives, Klinger says. What’s more, because orgasms have so many mental and physical health benefits, it’s possible to use said better, stronger orgasms to biohack other bodily functions as well—everything from period cramps to your immune system to your mood can be enhanced through a better relationship to pleasure.

This is precisely where we find Kayla, happily fiddling with her phone while she pioneers her own orgasm with data. As a late bloomer who didn’t get much sex education in school, Kayla tells me she got into biohacking in order to discover her own sexuality in a more personal and nuanced way than she could with a partner, whose needs she often found herself prioritizing over her own.

“I love being able to see what my body can do,” she says. “Biohacking myself with this app has actually made me think about my own pleasure in a way I never got the opportunity to before. It’s weird; considering what makes me feel good has become such a big part of my day.”

Taking into account the largely repressive and sex-negative culture we live in, the fact that technology is helping women like Kayla feel more empowered by pleasure is no small feat.

“Male pleasure and the importance of the male orgasm has been highly valued and validated for centuries,” explains Dr. Holly Richmond, a somatic psychologist and sex therapist who specializes in navigating the growing field of sextech. “Women are ready to claim our inherent right to pleasure and sexual health. We have lived too long in a culture where male sexual pleasure is a right and female sexual pleasure is a bonus. I’m excited to see the sextech industry is finally creating intelligent products that empower women to prioritize their pleasure.”

The question is, why now?

Orgasm and sexual pleasure have always been inherent to women and femme folk, but persistent taboos, sexual repression, and a lack of education and research have made these possibilities difficult to explore and enjoy with the same abandon that is often afforded to men. Meanwhile, in film, TV, and other forms of mainstream media such as porn, female pleasure is often depicted in a formulaic manner that makes it seem like there is one way—maybe two—to climax. While those methods may be valid for some women, sex and pleasure are far too idiosyncratic and personal to be reduced to such a cookie-cutter state. A far more useful model than media or our current education system would be to offer women viable ways to learn about what feels good for their bodies personally, not ways to conform to societal expectations about what sexuality should be.

That’s exactly where orgasmic biohacking fits in. There’s a demand for a smarter discourse about female pleasure, and technology and practices that increase women’s understanding of their own bodies might be the answer.

This, explains Richmond, is the issue that sextech companies are finally beginning to address.

Do It Yourself… Together

As you may have already guessed, Lioness is a major player in this game. Invented by Klinger as a smart toy designed to overcome the gaps in knowledge about female pleasure, the app-vibrator duo collects and interprets encrypted and anonymous data on users’ pleasure patterns. Using advanced biometric sensors, it monitors physiological responses like temperature, motion, and pressure to give users a clear idea of what is—or is not—contributing to their climax. In addition to tracking metrics, users can pose questions to and receive support from an online community of the like-minded Lioness pride.

In addition to collecting data on users’ individual pleasure experiences, Lioness also lets users voluntarily and anonymously submit their results for aggregate research, an option which has already begun to reveal some important discoveries about female pleasure. So far, Lioness data has found important patterns in how marijuana use affects orgasm (there’s no archetypical experience, but cannabis does seem to change people’s mental and physical experience in ways that are more pleasurable for some) and how concussions impact sexual functioning (they can reduce the frequency and intensity of orgasm, an effect which goes away as the brain recovers). It’s even led to the fascinating discovery that individuals have personalized orgasm patterns that are unique to them, almost like a blood type or a fingerprint shape.

Lioness appears to be the only company collecting this kind of data, but plenty of others are helping both singles and couples hack into pleasure. Lovely, a vibrating cock ring designed for couples’ play, is applying the pleasure-hacking process to partnered sex. Using the same smart toy-app model as Lioness, Lovely learns what you and your partner enjoy in bed and suggests new positions, stimulation techniques, and sex-related ideas based on your liking. We-Vibe offers users the option to customize their vibration patterns, sync them to music, and even use their product with a long-distance partner, essentially allowing people to hack their pleasure by hacking the functionality of their toys. B-Wom takes things in a decidedly more wellness-related direction with an app that provides pelvic floor training exercise routines, non-biometric progress tracking, and one-on-one expert support to enhance sexual health and pleasure.

While these smart toys and sextech innovations help to tailor and improve individuals’ orgasms, they also play a broader and more vital social function by making pleasure a normal, approachable, functional, and even shared part of everyday life rather than something to be devalued, dismissed, censored, or hidden. In that way, explains Richmond, trends in sextech that help women hack their own pleasure work to normalize, demystify, and legitimize sex and sexuality.

While orgasmic biohacking can yield important results for both women and society alike, Richmond warns there can be danger in over-technologizing sex and pleasure.

When taken to an extreme, reducing the experience of orgasm and sexuality to graphs, data, and motherboards can be just as problematic as reducing it to a single expression in porn or on TV. For that reason, she recommends that anyone interested in biohacking orgasms remember that diversity, not technology, is the key to better sex. “No one should use the same toy all of the time in the same way, no matter how great it is,” she says. “Sexuality has so much to do with novelty. Individuals and couples should always be looking for ways to mix things up and keep sex exciting, whether that’s new-school, with a Bluetooth-enabled device like the We-Vibe Sync, or old-school, with their partner’s lips and fingers.”

But whether you’re plugged into the high-tech world of orgasmic biohacking or not, there’s no denying this fast-developing practice has seeped into almost everyone’s lives on some level, and it’s a trend Richmond predicts will continue to evolve.

“Technology gets more prolific and ubiquitous in our lives on a daily basis,” says Richmond. “Whether we’re talking about apps, tech dating trends, sex with robotic companions, teledildonics, virtual reality, or AI-enabled companions, it’s likely that tech-sex will be the norm in the next decade, not the exception.”

In the not-so-distant future, Richmond envisions sextech taking on the role not just of hacking physical pleasure but also of deepening our emotional—and on many levels, spiritual—connections with ourselves and our partners.

“Opportunities for pleasure are expanding exponentially,” she says, “but of equal importance, so are opportunities for connection. Almost all of today’s sextech devices focus on connecting us with our partners, or more deeply with ourselves. People get to learn what turns them on, what helps them reach orgasm, what makes them feel connected, and, the best part, they get to feel empowered by it all. Sextech devices that connect us to pleasure are ideal for helping us achieve these necessary and blissful states.”

Following up with Kayla the next day to see if she had hacked the orgasm she wanted to, it would certainly seem that much is true.

Previous 12 Surprising Things That Can Boost Your Sex Drive
Next What Is Edging, and Does It Actually Make You Last Longer In Bed?