20 Things No Wife Ever Wants to Hear 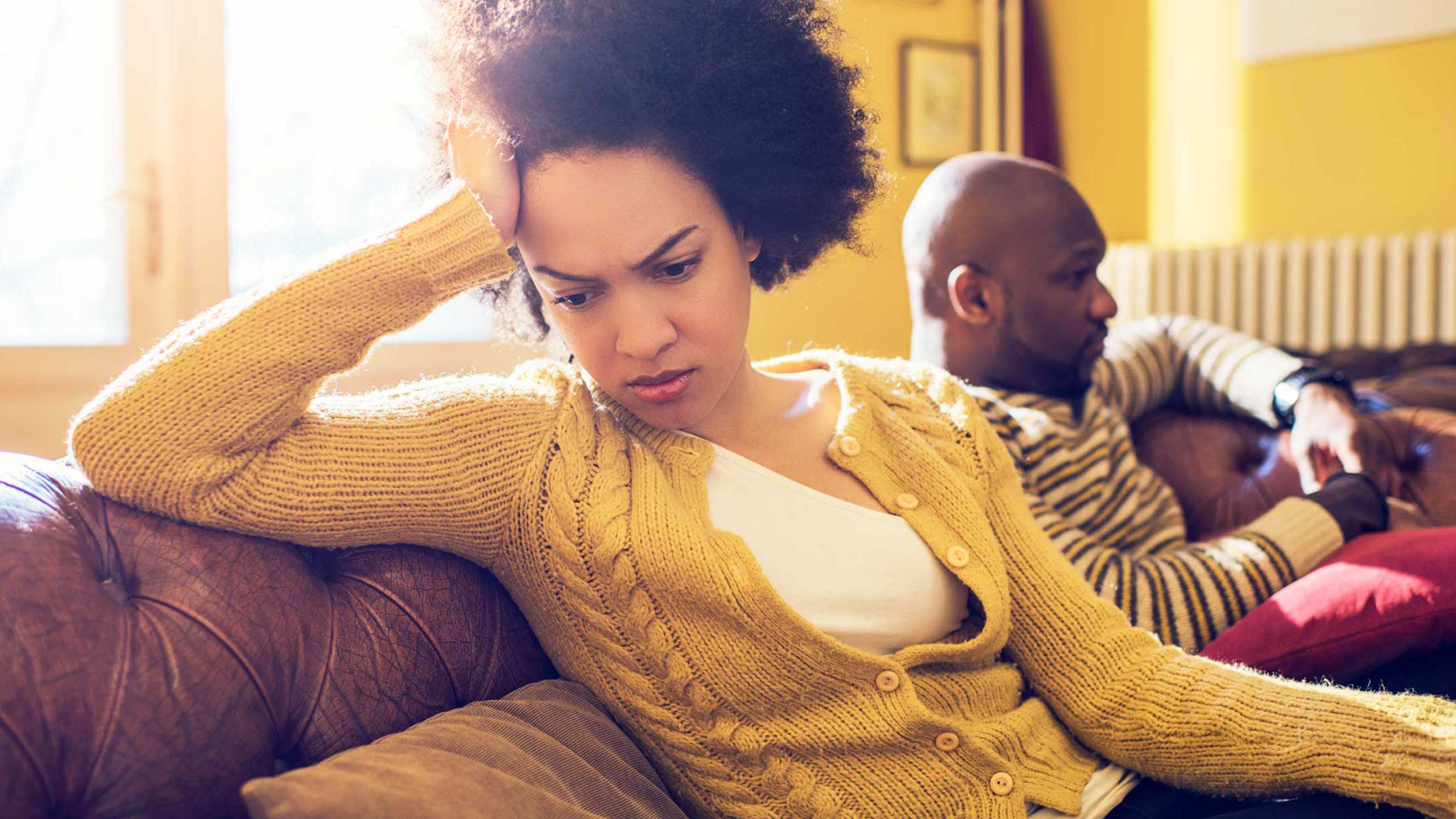 We all know that honesty is generally the best policy when it comes to long-term partnerships, but there are certain cases where brutal forthrightness can cause more harm than good. Herewith, you’ll discover all of the phrases and sayings your wife absolutely never wants to hear. So read on, and think carefully before you speak. And if your marriage is going wonderfully and you’re looking to spice things up in the bedroom, don’t miss these amazing secrets.

This might sound like a compliment in your head, but chances are that’s not how she’ll hear it. “It doesn’t matter if she gets along great with her mother in law, comparisons to any family member can completely kill the mood,” says Kimberly Hershenson, LMSW, a therapist based in NYC. Also, never say she reminds you of her own mother, for similar reasons. This is definitely one of the 40 Worst Mistakes Married People Make.

“If a woman is expressing her concerns or needs in the relationship and they’re dismissed, it makes her feel voiceless and powerless,” explains Dr. Wyatt Fisher, a licensed psychologist and founder of a couples retreat. No matter how unreasonable you think she’s being, find a kinder way to acknowledge her emotions. And for ways to really heat up your marriage, consider embracing your wilder side.

Similarly, it’s virtually impossible not to take your spouse’s words and actions personally. “We have a right to feel what we feel, and to work through those emotions with our partners,” notes Jodi J. De Luca, PhD, a licensed clinical psychologist. “To be denied this right is to invalidate a very intimate part of who we are, and often results in psychologically unsafe relationships.” You can try regaining your significant other’s affection by using any one of the 50 Relationship Quotes to Reignite Your Love.

This is basically just a cop-out, even if you feel that it’s true on some level. “Women need help, especially from their significant others,” points out Vikki Ziegler, celebrity divorce attorney, relationship expert, and author of The Pre-Marital Planner. “They want their spouses to step up and help with the kids, not solely rely on them to do everything.”  Get more connected with your wife by taking part in some of the Best Bonding Activities for Married Couples.

No one wants to hear this from their spouse out of the blue, but it’s especially bad to say these words when you don’t really mean them just to incite a reaction. “So often, couples run into temporary moments of discomfort in their marriages, and instead having logical conversations about how to make the relationship better, they go straight for the ‘D’ word,” notes Allison Maxim, lead attorney at Maxim Law. “This is not only unhealthy rhetoric, but making these comments could leave your spouse feeling unsafe and insecure.”

“In the midst of something tense, the word ‘relax’ from your spouse only ramps things up,” says Mitzi Bockmann, a certified life coach. Heed her advice and avoid this directive at all costs.

Sex can be a pain point that’s absolutely worth addressing, but this phrasing is likely to put your wife on the defensive. “The first 18 months of a relationship are magical in almost every way, particularly sexually,” notes Dr. Holly Richmond, Somatic Psychologist and Head of Advisory Board for Ella Paradis. “This frenzied phase cannot be sustained, but is typically replaced by amazing levels of security and deep, attuned attachment. A lot changes happen in relationships over the years, including having children, career stress, financial strain, health problems or perhaps having to care for a parent. It is absolutely possible for long-term couples to have an exciting sex life, but it is unlikely it will ever be like it was at the beginning. Be open to moving passionately into the future, not trying to recreate the past.”

Again, this might seem like a nice thing to say, especially if you still find your wife attractive, but the emphasis on the past makes it easy to take offense. “Having kids, aging, exhaustion and just getting comfortable in a relationship may lead to her not dressing up as much, working out as much or even having time for makeup,” Hershenson says. “She’s still the same person, so this comment can be very hurtful.” Reconnecting can be hard. If you want some great help, check out the 30 Things Straight Couples Can Learn From Gay Couples.

“Clearly if she has it on, that’s what she was planning to wear,” says Tiya Cunningham-Sumter, a relationship coach. This dreaded phrase will make her second-guess her outfit choice and likely deliver a hit to her confidence.

Often what’s interpreted as nagging is simply asking for help. “It can be particularly aggravating when the wife is reminding their husband of something they promised to do (several times) over the past weeks, months, or years or when the wife is expressing concern about their spouse’s health,” says Gina Gardiner, relationship expert and author.

Trust us, no matter how many times the question is asked, the right answer is always, “No, you look great!”

Having to repeat herself because you weren’t listening is likely to evoke annoyance. “For most women, emotional intimacy is a core need,” Dr. Fisher explains. “Therefore, if you respond like you’re not listening to her, it can be very hurtful and make her feel detached.”

“I find that when married couples find themselves in this situation, it is because neither of them can get on a financial plan that they both can agree on,” says Nolan Martin, a personal finance expert. “Typically, one of them is the spender and one of them is the saver. In many cases, they find difficulty in reaching common ground to prevent not having enough dollars to make it through the month.”

“This is code for maybe sometime, probably never,” Gardiner says. Heads up: Women know this.

“Most women don’t like to be asked about their orgasm prior to or during climax because it feels like pressure,” Richmond explains. “Most women would rather enjoy the entire sexual experience rather than being focused on having an orgasm—that’s an extra bonus but certainly not a prerequisite for having great sex.”

It can be tempting to say you’re will do something you know you aren’t going to do just to end a conversation about it, but that’s not an effective strategy in the long-term. “Men want to keep their wives happy, so they agree to do what they are asked to do. Unfortunately their follow through isn’t always the best,” Bockmann says. “And not getting things done that they say they are going to get done is worse than saying they can’t do it.”

“Our culture emphasizes looks above all else for women, and most women scrutinize themselves in the mirror for not feeling like they measure up,” Dr. Fisher says. “Therefore, commenting negatively about your wife’s looks can be extremely hurtful.”

The worst thing you can say to your wife when she’s not calm? This. “Men often find emotional outbursts difficult to deal with as they don’t have the resources to deal with them,” Gardiner says. “Men generally want to fix things, and when they can’t, they feel they have failed their partner. They become impatient, so instead of giving their partner the hug and support they need they are brusque, leaving their wives feeling they don’t care.” Try saying something simple and supportive instead.

This is a particularly touchy topic because it often means there’s something extramarital going on, or can be an unwelcome reminder of past relationships. “It’s scary to learn that you may contract something from your loved one who had unprotected sex in the past,” Ziegler says. “Getting tested and being proactive can help a spouse protect themselves.”

“In my experience, when there is a lack of engagement, no response to questions, or no empathy expressed when they are upset, it is incredibly hurtful and damaging,” Gardiner says. “The wife feels unseen, unheard, and describes a feeling of disappearing. It destroys their confidence and sense of self-worth.” So even if you’re not sure what to say, say something.